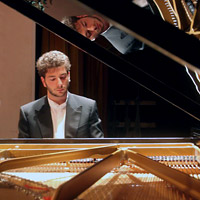 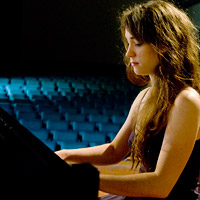 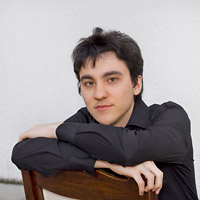 Born in Lecce in 1919, she devoted herself to music for over seventy years. Performed the first concert at the age of 9; diploma with highest honors from the Conservatory of Naples at 15 years, under the guidance of Alessandro Longo; advanced diplomas with honors at the Academy of St. Cecilia with Maestri Casella and Bonucci; granted first Award from the Chigiana Academy of Siena with the same teachers. Scholarship from the French government for a course in Paris with Marguerite Long. Executor of a huge repertoire (solo, chamber and symphonic music) and dedicatee of the music written for her by many prominent composers, has played all over the world with the greatest musicians and conductors. Has been awarded the title of Commendatore della Repubblica Italiana for her concert activities in favor of Italian music in the world. Her dedication to teaching (tenured professor at St. Cecilia Academy) granted her the gold Medal from the Italian Ministry of Education for the meritorious of School, Culture and Art.

After graduating in 1971 under the guidance of Nunzio Montanari, Andrea Bambace immediately obtained the professorship of piano at the Conservatory of Bolzano, alternating intense didactic and international concert activities, often in various chamber ensembles (since 1998 in a duo with his wife, the Korean pianist Hyun Jung ‘Sabrina’ Kang). He performed in several music festival both in Italy and abroad (Austria, Switzerland, United Kingdom, Spain, Germany, Poland, Bulgaria, Czech Republic, Korea), playing piano solo recitals, piano concertos with orchestra and chamber music repertory in many important venues at the Scala Theatre in Milan, the Regio Theatre in Turin, “Settimane Musicali di Stresa”, the Brahms Festival in Sofia, the Mozart Festival in Rovereto, the Musikhalle in Hamburg, and in Warsaw, London, Prague, Salzburg, Zaragoza, Rome, Seoul, Pusan, etc. He has performed with orchestra in Italy and abroad with such conductors as Stefan Anton Reck, György Györivany Rath, Wilhslm Barth, Maurizio Colasanti, Stephen Kramer, Hermann Michael, Alberto Peyretti and many others. The premiere performance of unpublished piano pages of Ferruccio Busoni, Giacomo Puccini and Mario Pilati stands out in his rich artistic curriculum. Often invited to join the juries of major national and international competitions, for many years was a member of the Board of the International Piano Competition “Ferruccio Busoni” in Bolzano. Since the 1970s is a music critic for the daily press, for National and Regional RAI, and for the monthly “Piano Time”, “Applausi”, “Suonare” and “Musica” magazines.

Former pupil of great pianists and composers such as Luigi Dallapiccola, Carlo Zecchi and Nikita Magaloff, Riccardo Risaliti (Florence, 1939) was for years an important music critic, before dedicating completely to concert activities and teaching. Professor for 30 years at the Conservatory of Milan, currently teaches at the International Piano Academy in Imola since its foundation, as well as at other important musical foundations in Italy and abroad. Scholar of the history of the piano, regularly holds courses and seminars on pianistic interpretation: among others, at the Sommerakademie Mozarteum in Salzburg, at the Festival of Nations in Città di Castello (Perugia), at Villa Ca ‘ Zenobio of Treviso and in various Conservatories in Italy and abroad.

Born in Tokyo, held her first concert at age 13 with the Symphonic Orchestra of Osaka. After finishing her studies in Japan and in Germany (Monaco of Bavaria), was invited in 1994 by the famous director Sergiu Celibidache for a production of the Munich Philharmonic Orchestra and since then has performed in major theaters around the world. Member of prestigious international Juries, teaches in Germany at the “R. Strauss” Conservatory of Monaco, and gives concerts as a soloist and in chamber ensembles, preferring the music of Bach, Scarlatti, the authors of German Romanticism, Chopin, Debussy and Ravel (of which she produced memorable recordings).

Admitted just at age 13 at the Tchaikovsky Conservatory in Moscow, she soon distinguished herself among the best pianists in the Soviet Union, however her early concert career has suffered for a long time the strict control of political authorities. Nevertheless, the strict impositions on dates, places and music concerts to be performed allowed her to perform extensively in the Soviet land and to build a vast repertoire Only with the independence of Lithuania in 1991 Muza was finally able to move to Paris, where she was awarded the title of “Les Grands Maitres Francais”. Today she is meritoriously described by many critics as “The Magnificent Mûza”.

Son of Vladimir Ashkenazy, one of the greatest pianists of the twentieth century, Vovka is his eldest son and direct heir of the genetic and spiritual heritage that Vladimir has infused the whole family, becoming himself a pianist of international renown (while his younger brother Dimitri preferred to concentrate on clarinet). Accepted at sixteen years at the Royal Northern College of Music, Vovka Ashkenazy debuted in the 1st concert for piano and orchestra by Tchaikovsky with the London Symphony Orchestra. Since then his career has resulted in the most prestigious theaters in Europe, Australia, New Zealand, Japan and the two Americas, performing in the major music festivals worldwide and playing as a guest of all the major British orchestras and more (Los Angeles Philharmonic, Australian Chamber, , Berlin Symphonic Orchestra, etc..). Currently resident in Ticino, where he teaches advanced courses in the Conservatory of Italian Switzerland, often collaborates on projects promoted by his father, now mainly active as a conductor and in important musical recordings.

Jeffrey Swann (Williams-Arizona, 1951) is a performer and teacher renowned throughout the world, trained at the Juilliard School in New York and awarded by all the major international competitions (Warsaw Chopin, Dino Ciani, of La Scala in Milan, Van Cliburn in Texas , Queen Elisabeth in Brussels …). Currently has a vast repertoire that includes more than 50 concerts and solo works, ranging from Bach to Boulez and from the complete sonatas of Beethoven to transcripts of the late 1800s. He is also a highly esteemed composer and performer of contemporary music, as well as a lover of literature and Visual Arts, constantly looking for new ways to give to his programs a deeper cultural significance.