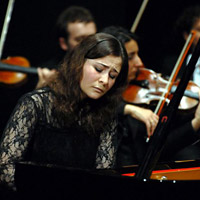 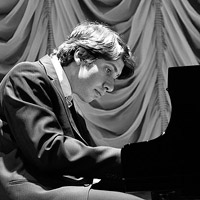 Natalia Troull began studying piano in her native St. Peterburg. She later moved to Moscow where she graduated from the Moscow Conservatory. Among her teachers were professors Y. Zak, M. Voskresensky and T. Kravchenko. Her performance career was launched when she won the first prize at the Belgrade International Piano Competition in 1983. However, the biggest success came in 1986, when she won the silver medal at the Tchaikovsky International Piano Competition. In 1993, Natalia Troull was awarded the Grand Prix at the Piano Masters Competition in Monte-Carlo (where only winners of international competitions are accepted as participants). Among the distinguished orchestras with whom she has performed are the London Symphony Orchestra, Los Angeles Philharmonic Orchestra, Japan Philharmonic Orchestra, Orchestre de Monte-Carlo, Tonhalle Symphony Orchestra and all of the major Russian Symphony Orchestras. Natalia Troull has also played with such conductors as Raphael Frubeck de Burgos, Raymond Leppard, Jean-Bernard Pommier, Eri Klas, Gennady Rozhdestvensky, Vassily Sinaisky, Yuri Temirkanov and many others. Her repertoire includes over 50 concertos, of which the Tchaikovsky concerto has proved to be the most popular, the pianist having performed the work on over one hundred occasions in the world’s leading concert halls. Natalia Troull is frequently invited to teach to the U.S.A., Japan, Italy, Germany and South America. She is Professor at the Moscow Tchaikovsky Conservatory and Guest Professor at the Como “Accademia Europea di Musica” (Italy). She is a jury member in many international piano competitions.

Carles Lama was born and grew up in the city of Girona, Spain. There, in the same city, he obtained the Diploma of Professional in piano from the Conservatory “Isaac Albéniz” and later the Superior degree at the Liceu Music Conservatory in Barcelona. He continued his musical training in Paris, with Aquiles delle Vigne, at the École Normale de Musique “Alfred Cortot”, and in the United States with Luiz de Moura Castro. He obtained scholarships and won the Talent Award from the Hartt School of Music (University of Hartford in Connecticut). His international career as a pianist has led him around Europe, America and Asia. He regularly performs in world capitals such as Paris, London, Madrid, Brussels, Rome, Barcelona, Milan, Prague, Belgrade, Tokyo, Kuala Lumpur, Shanghai, St. Petersburg, Moscow, Buenos Aires, Montevideo and others. He has made numerous musical recordings for the music companies Ars Harmonica and KNS-classical and also recorded for RNE- Radio Nacional de España, Catalunya Música, Radio France, BBC London and Classic FM Australia. Since 1987 he has a duet of piano four hands with his wife Sofia Cabruja. He has often been invited to conduct master classes in Spain, Italy, Belgium, Greece, China and Singapore. In 2001 he received an honorary distinction from UNICEF in recognition of his humanitarian effort in benefit of the needy children of the world.

After graduating in 1971 under the guidance of Nunzio Montanari, Andrea Bambace immediately obtained the professorship of piano at the Conservatory of Bolzano, alternating intense didactic and international concert activities, often in various chamber ensembles (since 1998 in a duo with his wife, the Korean pianist Hyun Jung ‘Sabrina’ Kang). He performed in several music festival both in Italy and abroad (Austria, Switzerland, United Kingdom, Spain, Germany, Poland, Bulgaria, Czech Republic, Korea), playing piano solo recitals, piano concertos with orchestra and chamber music repertory in many important venues at the Scala Theatre in Milan, the Regio Theatre in Turin, “Settimane Musicali di Stresa”, the Brahms Festival in Sofia, the Mozart Festival in Rovereto, the Musikhalle in Hamburg, and in Warsaw, London, Prague, Salzburg, Zaragoza, Rome, Seoul, Pusan, etc. He has performed with orchestra in Italy and abroad with such conductors as Stefan Anton Reck, György Györivany Rath, Wilhslm Barth, Maurizio Colasanti, Stephen Kramer, Hermann Michael, Alberto Peyretti and many others. The premiere performance of unpublished piano pages of Ferruccio Busoni, Giacomo Puccini and Mario Pilati stands out in his rich artistic curriculum. Often invited to join the juries of major national and international competitions, for many years was a member of the Board of the International Piano Competition “Ferruccio Busoni” in Bolzano. Since the 1970s is a music critic for the daily press, for National and Regional RAI, and for the monthly “Piano Time”, “Applausi”, “Suonare” and “Musica” magazines.

He made his Italian debut in 70s thanks to some very important international competitions he was awarded in, like the “Ferruccio Busoni”, the “Dino Ciani”, the “Ettore Pozzoli” the “Rina Sala Gallo”, the “Cata Monti”, the “Beethoven” in Wien, the “Reine Elisabeth” in Bruxelles, the “Liszt-Bartok” in Budapest and the “Paloma O’Shea” in Santander, achieving three absolute ﬁrst prizes, two second prizes and several other special mentions.

Afterwards he started a prestigious piano concert career, performing in the most important theatres worldwide – among them the Sala Philarmonia in Kiev, the Queen Elizabeth Hall in London, the Park Musik Hall in Dallas, the Musikverein in Wien, the Teatro Colòn in Buenos Aires.

Nowadays Daniel Rivera is widely renowned and highly esteemed worldwide within the piano concert landscape, considered a pioneer of piano challenges and a performer of programs and works very rarely played; this interest hit the highest spots in 2002, when he presented – in a world premiere performance – his transcription of the “Rite of Spring” by Stravinsky conﬁrming once again his extraordinary technique and interpretative skills.

This impressive and worldwide unique transcription captured the interest of Martha Argerich, who personally invited Rivera to the “Progetto Martha Argerich” in Lugano, where he performed in June 2009. Since that time, the link with the legendary Argentinian pianist turned into an intense artistic cooperation. With Martha Argerich, Daniel Rivera performed in piano duo (two pianos and piano 4 hands) at the Teatro Ponchielli in Cremona, at the Teatro Lirico in Cagliari, at the Politeama Theatre in Catanzaro, at the Teatro Nuovo Giovanni di Udine, at the Piano Festival of Pietrasanta and Ascoli Piceno, up the legendary concerts on 19th and 20th October 2012, at the Teatro El Circulo of Rosario (Argentina) – four CDs have been released in June 2014, edited and distributed by IRCO in Buenos Aires – and for the inauguration of the Petrarca Theatre in Arezzo on December 2015, and the prestigious “Greek Theater” of Taormina (Sicily) in August 2019.

Still for IRCO Cosentino in Buenos Aires he recorded two CDs with Franz Liszt Opera transcriptions and paraphrases, as well as the 12 Trascendental Studies. Jury member within some relevant international piano competitions, Daniel Rivera is extremely keen of teaching: besides his faculty chair at the “Istituto di Alta Cultura Musicale Pietro Mascagni” in Livorno, at “Accademia Strata” in Pisa, at the “Academy of the Arts” in Sarzana and at the “Musica Ritrovata” Academy in Livorno, he is frequently invited to hold several high piano courses and master classes in Italy and abroad, such as at UNR, University of Rosario (Argentina) Conservatory of Music in Udine, Parma, La Spezia, Bari, Monopoli, Trieste, Cosenza, the Lemmeintitut in Leuven, Belgium, the “Summer Musical Holidays” in Urbino, the International Festival “Duchi d’Acquaviva” in Atri, “Via Francigena” International Arts Festival in Lucca, and the Livorno Music Festival.

Maurizio Barboro completed his artistic education at the “Accademia Nazionale di Santa Cecilia” in Rome, under the guidance of the famous Italian pianist Lya De Barberiis. Winner of many Italian piano competitions, since 1980 he has combined an intense career in Italy as well as in the major cultural centres in Europe, Asia and America, collaborating with famous conductors (Ovidiu Balan, Karel Mark Chichon, Teodor Costin, Liviu Buiuc, Viktor Dubrovski, Francisco Noya, Paolo Peloso, Jeffry Rink and many others) and prestigious orchestras. Since 1996 Barboro has been currently “artist in residence” and “permanent soloist” of the Dumitrescu Philharmonic Orchestra of Valcea (Romania). In 1999 he made his debut in the United States, where now he is periodically invited to hold master classes at institutions such as Boston Conservatory, Longy School of Music, Rivers School, Sosu University of Oklahoma, Vancouver Clark College. Maurizio Barboro is the holder of the Chair of Piano at the “Paganini” State Conservatory in Genoa and at the International Summer Courses in Bergolo (Italy). He is a member of the jury of several prestigious international contests, Art Director of the “Schubert Prize” International Competition in Italy and the “Alfredo Casella” Music Association.

Pascal Nemirovski was born in France in 1962. In 1981, he was admitted to The Juilliard School (New York) on full scholarship (Steinway & Freundlich Fund) and studied with Nadia Reisenberg, pupil of Joseph Hoffman and Adele Marcus, pupil of Joseph Lhevinne and Artur Schnabel, heirs of the Teodor Leszetycki school. Pascal Nemirovski settled in Paris in 1984 and pursued further studies with France Clidat and Alexis Weissenberg. He has given numerous concerts and master classes in Europe, the United States and Asia. These events were covered by both French and foreign radio and television companies. In 1995, following a triumphal recital given at the Louvre Auditorium in Paris, Pascal Nemirovski decided to withdraw from the concert scene in order to devote himself to the study of repertoire and pedagogy, which he considers “an infinite source of enrichment and knowledge, as well as an authentic artistic and human exchange”. Since then, he has devoted himself to his students amongst them the young French pianist Lise de la Salle. A number of his pupils from China, France, Germany, Greece, Italy, Japan, Portugal, Korea, Russia, South Africa, Spain, Switzerland, Taiwan, United Kingdom, USA… have won prizes. He enjoys an international reputation as a teacher, presenting master classes throughout the world and is often a jury member at international piano competitions. In 2006, he was appointed Professor at the Royal Academy of Music in London and was awarded an honorary ARAM (Associate of the Royal Academy of Music) in 2009. In 2011, he is appointed Professor at The Purcell School in London.

Graduated with the highest marks in Organ from the Conservatory of Udine, with maximum marks and the distinction Auszeichnung (praise) from the Vienna Academy (Hochschule für Musik und Darstellende Kunst), Paolo Paroni has been described by international music critics as “…a true star of the international emerging music scene…”, “…a splendid young maestro, (…) who conducts with a very expressive technique and clear and stirring gestures…”. Winner of several national music competitions for Composition (during his Composition studies under Daniele Zanettovich), Organ and Choir Conducting, it was the prestigious podium of the Slovenian Philharmonic Orchestra of Ljubljana that proved the crucial turning point for Paolo Paroni’s conducting career and his debut on the international circuit (the Zagreb Music Biennale, the Music Weeks of Sofia, “Musica e Poesia a S. Maurizio” in Milan), including some prominent venues such as Tonhalle Düsseldorf, Bulgaria Hall in Sofia, Lisinski Centar in Zagreb, Ljubljana Philharmonic Hall, Radiokuturhaus of Vienna, S. Maurizio of Milan, Philharmonic Theatre of Verona, and the Teatro Olimpico of Rome. Paroni has also recorded and performed in live national broadcasts for BNR (Bulgarian National Radio), RAI (Italian Radio-Television), ORF (Austrian Radio-Television), HRT (Croatian Radio-Television), Koper (Slovenian Radio-Television).

Any cookies that may not be particularly necessary for the website to function and is used specifically to collect user personal data via analytics, ads, other embedded contents are termed as non-necessary cookies. It is mandatory to procure user consent prior to running these cookies on your website.